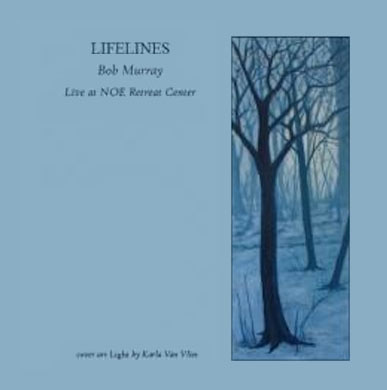 There is a compelling catch in Bob Murray's voice on his album Lifelines that holds the listener still the way Tom Waits and Bob Dylan can—like the pause before a fall, in this case into songs of surprising depth.

The uniqueness of Murray's voice coupled with lyrics exploring truths we can all feel and recognize brings each song on the album alive in a rare and remarkable way.

In the tradition of classic folk and blues, Murray's harmonica, guitar, and piano set a tone that excites the ear and leaves the senses wanting more, and the more comes in words, dreams and stories mined from the very personal riches of Murray's life. In a Dantesque manner, his songs explore the reaches of the psyche—the demons and the divine that live deep within. The celebration of this journey can be felt to the bone in his culminating track “The Meek Shall Inherit a Wolf.”

Few musicians possess Murray’s level of sincerity; his craft in expressing his personal journey without pretense refreshes and inspires. Lifelines is an album of courage and vulnerability that comes in close and stays close.

Murray has two more albums, Alligator Tears, recorded during a riveting live performance, and O Boss Man, a collaboration with keyboard and accordion master Jeremiah McLane. He is the author of A Chicken Hawk Goes Home: One Man's Journey Through Archetypal Dreamwork, and teaches Musicality: Vulnerability through Music at the Center for Archetypal Dreamwork (www.northofeden.com) in Montpelier, Vermont, and in private practice.

"This second CD of mine is similar to the first in at least one respect—these songs are all deeply personal. As the title, lifelines, implies, these lyric lines are most definitely all about my life, my inner life. Yet if the first recording was all about pain and the requisite willingness to feel into its dark tunnel, then this new collection is arguably posited near the far end of that tunnel—a weary wanderer stretching out his long-cramped body, blinking in the almost-overpowering morning sun.

In Track #5, entitled Early Morning Stretch, the refrain is as follows:

Oh…look at what you’ve done to me, my friend
You’ve turned me all upside and down
I’m off to dreamland like a child by nine at night
And I’ve forgotten how to whine or even frown

Such is the current state of my being. And I have that man, my friend in the song, to thank for it. Because without Him (the animus, divine guide…fill in your own preferred moniker), I might never have found myself emerging from that dark tunnel. Pretty amazing, really! Were this not my life, my body that tingles with recognition of this, I would not have believed it possible.

So gratitude then, whole trainloads of it, is what I feel most often these days. And I hope you as listener can feel that pervasive undertone throughout all of these songs. I certainly do when I play them."